Thankful for an Ant

We are about a week from Thanksgiving, right? Perhaps we should correct that; as you know, all seasons are seasons of thanks. There is something about being thankful for what you have that keeps a positive outlook, which in turn keeps you from ruminating over what you don’t have. We really do have much to be thankful for as Christians – especially as Christians in such a comfortable society (2020 stresses included). 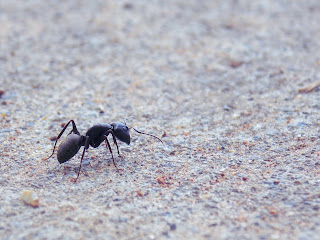 How would anyone be thankful for an ant? I love watching my wife look out the window at birds. We have such a variety here in Queens. She loves them. Birds are ok, but the bugs we could do without. After all, there are so many of them. I guess they are ok as long as they stay outside. Corrie was thankful when visited by an ant.

I mentioned Sunday that I’m reading through “The Hiding Place” by Corrie Ten Boom which is an amazing testimony of a Christian family that showed God’s kindness by helping Jewish people escape Nazi occupation in Holland. In doing so, they were arrested and had to spend time in a Nazi prison camp.

Many scenes from the book make me thankful for what I have, but one haunting one is how Corrie welcomes an ant into her jail-cell. Later on in the story, she has to thank God for fleas. For now, I’ll just share her thankfulness for an ant.

Months of her life was spent in solitary confinement in prison in Holland because she had the flu and the prison guards didn’t want to deal with the fever spreading to the rest of the camp. Days on end, weeks on end, she waited in solitary confinement. Her birthday passed, Sundays passed, still no human contact. In those difficult days of silence, she longed to see a human face. “How rich is anyone who can simply see human faces!” (pg. 151). But then she had a visitor – an ant crawled in from a crack in the wall.

“I was not alone much longer: into my solitary cell came a small busy black ant. I had almost put my foot where he was one morning… when I realized the honor being done to me. I crouched down and admired the marvelous design of legs and body. I apologized for my size and promised I would not so thoughtlessly stride again.

After a while he disappeared through a crack in the floor. But when my evening piece of bread appeared on the door shelf, I scattered some crumbs and to my joy he popped out almost at once. He picked up a heroic piece, struggled down the hole with it and came back for more. It was the beginning of a relationship.

Now in addition to the daily visit of the sun I had the company of this brave and handsome guest – in fact soon of a whole small committee. If I was washing my clothes in a basin or sharpening the point on my homemade knife when the ants appeared, I stopped at once to give them my full attention. It would have been unthinkable to squander two activities on the same bit of time” (Pg. 151 – purchase the hiding place here).

The beautiful attitude of our dear sister, who had next to nothing, gives perspective to all we have to be thankful for – ants included.

“Be filled with the Spirit, speaking to one another in psalms and hymns and spiritual songs, singing and making melody with your heart to the Lord; always giving thanks for all things in the name of our Lord Jesus Christ to God, even the Father; and be subject to one another in the fear of Christ” (Ephesians 5:18-21).

May the Lord give you His grace to be thankful for all things today! Please pass along any prayer requests you would like me to keep in prayer for you.